Narratives of March and April Events 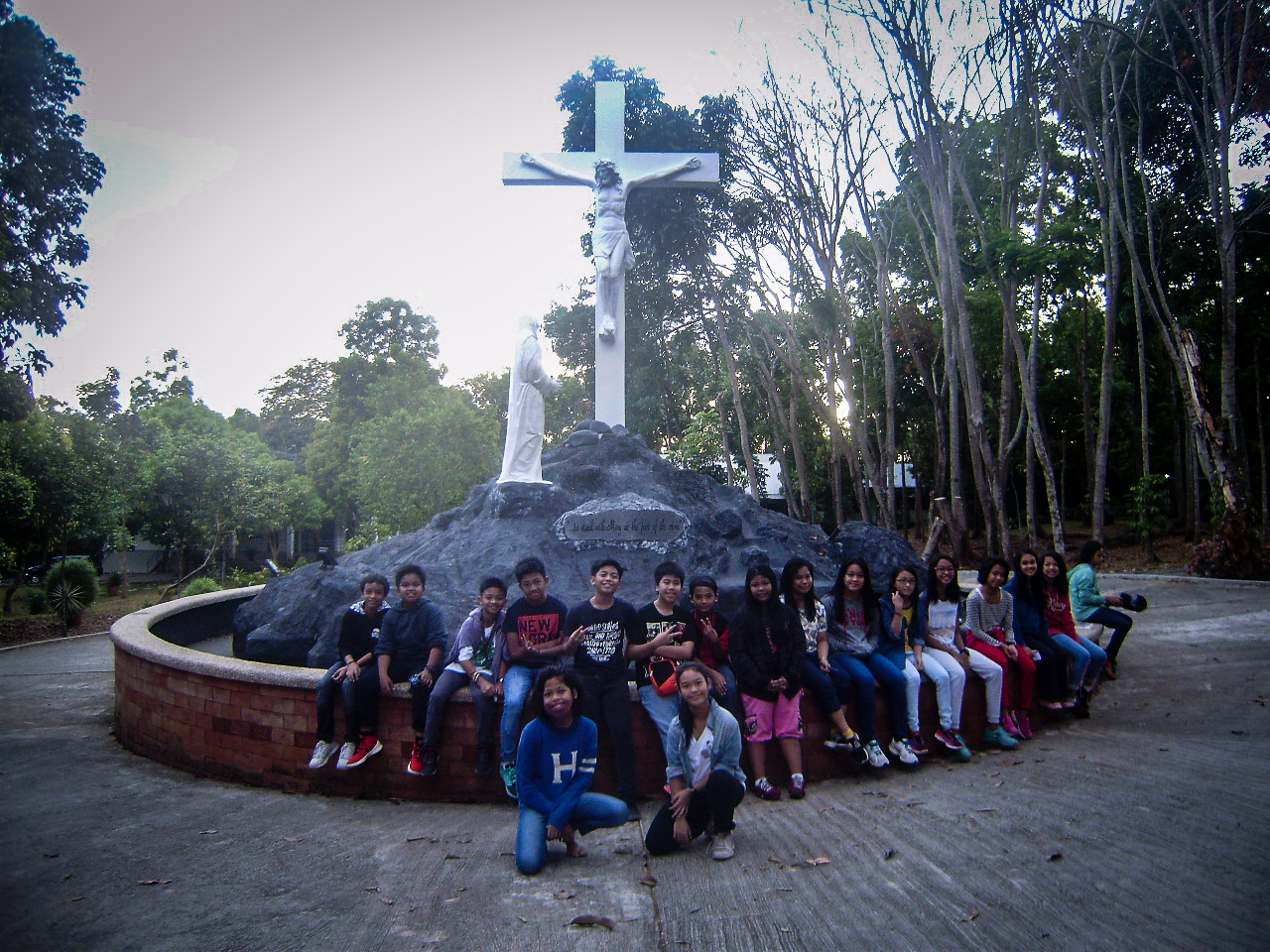 Theparents’ recollection took place last March 4, 2017 at the AVR.  Fr. Christian “Toots” Buenafe, O Carm., facilitatedthe said recollection which focused on the Lenten season. He reminded theparents and guardians of the importance of accepting Jesus in our lives and lettinggo of those things that keep us away from Him. He also encouraged them toexamine their conscience and start a new life with Jesus. Fr. Toots shared somewords of wisdom and showed some videos that stir up emotions and motivate thelisteners to act on them.

It has beena meaningful recollection since the parents and guardians were able to reflect onthe ideas presented by the Fr. Toots. The audience also enjoyed the sense ofhumor of the facilitator. He could relate to the experiences of his listenersso it was easy for him to adjust and make his presentation more appropriate andextensive.

After therecollection, the issuance of report card followed. Parents and guardians tookthe opportunity to check on the academic performance and behavior of theirchildren.

Theregistration for Family Day 2017 kickedoff early. The program began with a Eucharistic celebration presided by Fr.James Castillo. Together, the Carmelite family prayed God’s grace and guidanceto be able to have a meaningful and joyful celebration.

The zumbasession followed shortly which lasted for almost an hour. Parents, teachers,students, guests, and even the sisters joined the fun and showed their dancemoves. Everybody seemed to enjoy the zumba for they did not mind the heat anddust at the flagpole area. They jumped, bent, turned around and moved to thebeat.  Meanwhile, the different clubsstarted preparing their booths for the Club Fair at the multi-purpose hall(MPH). The members and officers of different clubs became busy selling theirproducts or promoting their gimmicks and other activities to raise additional fund.Some of the booths are the Spelling Booth (English Club), Message Booth(Science Club), and Face Painting Booth (Performing Arts Club). The booths wereclosed at 12:00 noon then everyone was requested to proceed to the breezewayfor the raffle draw – the fund raising activity of the PTA. Mr. Arbon and Mr.Perez hosted the program. They made the event more enjoyable with their antics.No wonder people burst out laughing most of the time. The raffle draw began andas soon as the names have been called, the lucky winners claimed their prizes.

Others enjoyedvisiting the booths and stalls stationed at different parts of the school.There were a lot of foods and products to choose from. Others also enjoyed theperformances of our talented students and teachers. After the raffle draw,Professor Jeremias Navarro Perez and the choir presented some of the songs intheir concert repertoire. This was to raise additional funds for the choir. Thespectators could not help but admire the flair and enthusiasm of the choirmembers. It was such a successful event.

The SMCCSChoir has been very active in showcasing their talents by participating in thedifferent programs and activities of the school. Professor Jeremias NavarroPerez, the hardworking and brilliant mentor of the choir, devotes his time,talent, and energy just to ensure that these children learn and take full advantageof their God-given talents. They practice regularly and tirelessly to improveand perform better each day.

This yearthe SMCCS Choir, for the third time, has taken the center stage for a concertentitled Laudate Dominum: SMCCS Choir in Concert. For two nights, March30 and April 1, the choir has given their best to give the audience a wonderfulevening of songs. The tickets cost P200 for regular seats ( 2nd and3rd rooms of the AVR) and P300 for the front seats (VIPs). Everybodygot involved in this important event. The students, sisters, teachers and eventhe choir members helped in selling the tickets. The proceeds of the saidconcert would be used for renovating the rooftop into a venue for trainingsessions.

The concertwas memorable and successful. They captivated the hearts and souls of theaudience. For sure, people will always remember that show.

On April 8,2017 the PTA had its last general assembly for the school year. Mr. Cueto, thePTA president, together with other parent officers, presented the activities,resolutions, and accomplishments of the board. With the help of the teachersand sisters, they were able to maximize the funds and do a lot for theCarmelite community. This includes giving financial support to the varsityteam, extending financial help to the bereaved family of the late Mang Tanteand Mrs. Melissa Pascua. The PTA also bought two aircons for the AVR. TheFamily Day was their most important event of the year. They raised fund throughthe raffle draw and other activities during the Family Day. Mrs. Latorinopresented the financial report to all the parents and guardians who attendedthe said meeting.

The monthof April has been very busy for SMCCS faculty and staff. There are four majorevents to prepare. One of these is the Preschool Moving Up scheduled on April21, 2017. The adviser of the prep and kinder classes, Mrs. Mary Ann Adornastarted preparing for the event with the help of other faculty members. Taskswere given to ensure that no stone would be left unturned. After several daysof practices, the preschoolers were finally ready for the big day.

The big day hascome and everybody was excited. The wonderful kids wore their costume showingwhat they would want to be in the future. Some dressed up as police officers, nurses,flight attendant and pilot among others. The parents, guardians, and relativeswere happy to see their little ones on stage showing their talents. Indeed, itwas a successful event.

The Grade 10students have finally come to this special day – they would be receiving thefruits of their labor. Diplomas, awards, and warm congratulations coming fromtheir teachers, families and friends would be acknowledged with pride.

The program washosted by Mr. Jonathan G. Robles Jr. The theme this year was: Leaving a mark inhistory: Be the prophets of love, freedom and fidelity.” The inspirationalspeaker was Dr. Victor Marco Esmeris, MD. The Grade 10 completers have showneveryone that their batch was special and unique in many ways. The meaningfuland significant even has been realized because of the hard work and patience ofall the teachers, staff, maintenance and support of the administration.Professor Jeremias Navarro Perez has always been there provide good music tomake the occasion more evocative.

On thisday, April 25, the Carmelite family is gathered together to celebrate the accomplishmentsof young Carmelites who remained determined and disciplined in facing thechallenges this the school year. The program began with an invocation led bythe SMCCS Choir. Sr. Schielden E. Torreda, O Carm., the school principaldelivered her welcome address.

Special andacademic awards were given to deserving students. Special awards given arePerfect Attendance, Achieve3000 Reading Award, and MathScore Top 10 Scorers. Academicawards include First to Third Honors and Special Recognition. The awardees fromGrade 1 to ten received medals and certificates together with their proud andhappy parents and guardians.

Todaymarks another milestone in the lives of our dear Grade Six pupils. It is theirgraduation day. A baccalaureate mass was offered with Fr.Christian Buenafe, OCarm. as the celebrant. He also shared some words of encouragement to thegraduating class as everyone listened intently. After the mass, the graduationrites had begun. The graduating pupils and their proud parents and guardiansprepared for the processional. The SMCCS faculty and staff, the Carmelitesisters, and other guests also joined this momentous event.

Ms.Kristy S. Ventolero, the Grade 6 Class Adviser, introduced the guest speaker,Mr. Jose Aldous R. Arbon II. The moment the speaker started his speech, theaudience couldn’t help but admire his eloquence. He certainly has the gift ofthe gab. He inspires people with his words of wisdom and encouragement. Hespoke for almost ten minutes but perhaps people did not notice, for everythinghe had said was worthwhile. When he ended his speech, the crowd gave him around of applause as a way of showing appreciation and gratitude. Theconferment of graduates followed shortly then the diplomas were given. The nextpart was the awarding of certificates and medals to the awardees. The awardeesand parents received the awards with pride.

The classof 2017 then performed two songs, their theme song “History” and their graduation song “Best of Times”.  Mrs. AmaliaT. Quiam formally closed the program with her closing remarks and someannouncements.